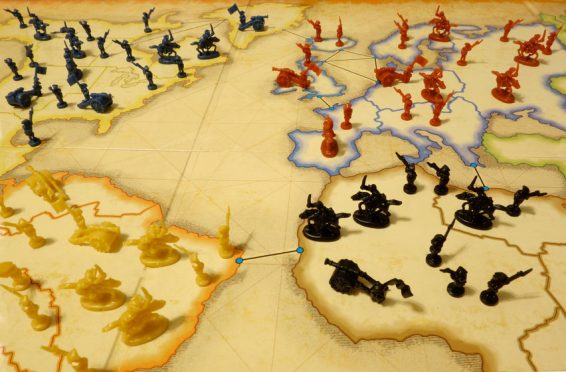 Would you rather watch than read? Click here for the 8 minute video.

The war in Ukraine has left us all feeling some combination of sadness, anger, and hopelessness.  It also reminds us of just high the stakes can be when trying to anticipate the future.

Apparently, the US government tried modeling the possibility of a potential nuclear war during the Obama administration.  They tried to imagine under what circumstances one of the nuclear powers would use such a weapon. One scenario included a Russian attack on a Baltic state—and a struggle to win the ground war. The scenario played out with Russia deploying a “low yield” nuclear weapon in a NATO stronghold. Of course, the next question was and is, what should the US or NATO do in response?

It’s a good thing that they considered such a catastrophe. Otherwise, we might already have done something leading to that very reality.

Thinking about how badly things could go can keep us from making mistakes when things are most precarious.

As we each wonder for ourselves how our current history will unfold and what actions would or could precipitate what response, many of us are becoming armchair generals. We’re practicing our scenario-planning skills.

There is no higher stakes scenario than a possible nuclear first strike. And while your business’ stakes do not rise to that level, they are high enough to warrant using scenarios in your planning. And, like the Generals pondering a nuclear strike, you need to consider even the worst-case scenarios.

Scenario planning was first formalized by Pierre Wack, at Shell Oil, who got the idea from Herman Kahn, a futurist who had been making apocalyptic predictions for decades. (Some say that Kubrick based the character of Dr. Strangelove on Kahn.)  Wack’s team at Shell used the method to anticipate the 1970s oil crisis. As a result, Shell survived what its competitors did not. In the 1980s they once again beat the odds by anticipating the crash of the oil markets.

Things May Not Work Out

As effective as scenario planning can be, it often fails. The most frequent failures come from neglecting pessimistic scenarios. It’s not unlike knowing that flood risks are increasing in your area but, nonetheless, failing to consider your house might flood, and therefore not buying flood insurance.

Of course, you can’t predict everything.  A global pandemic in 2020 was probably not included in any organization’s scenario plan. But you can and should plan for massive disruptions and disastrous conditions.

In much of business–especially the tech start-up world–-it has become taboo to display anything less than pure optimism. That resistance to considering downsides may be good for morale and building enthusiasm, but it’s not good for planning.

Groupthink and the optimism bias are both perpetual dangers in organizational planning. This is especially true in high-growth startups, where a visionary leader’s influence can be contagious.

Tech has a new and unique challenge in avoiding optimism bias because the pandemic was less like a tragedy and more like an accelerator for many companies. But the next dire event may not work that way. If war or an unanticipated asteroid hit took down all Internet connectivity, technology would become victim not savior.

Scenario planning can balance that by inviting input from those who might otherwise keep quiet. Unlike most planning, it explicitly demands multiple views. Someone who might not want to “rock the boat” by disagreeing with the boss’ rosy outlook, may feel freed to offer a countervailing view.

That opening for creativity may elicit cautionary considerations about potential dangers.

There’s a T in SWOT

I was working with a high growth start-up that was vying for first place in their main vertical. Their prime competitor had failed to overtake them only because they didn’t have the funding to do so. With much deeper coffers, they could easily have dominated because they had multiple product and marketing advantages.

While we were developing scenarios for an annual strategy, one inherently skeptical team-member suggested that the competitor could get acquired. And he campaigned for including that scenario. Even in the preliminary S.W.O.T. analysis, no one had mentioned that possibility. As often happens, once the suggestion overcame the initial naysaying, there was a moment of silence while everyone considered the notion.

What would that mean for the future? The more they talked, the more obvious it was that the competitor was perfectly poised for acquisition. If that happened, they could crush my client. It was an unavoidable threat.

They crafted a strategy to address it.

Within the next 6 months, sure enough, the competitor was acquired by a global brand. In that same timeframe, my client’s company had expanded their inroads into a different target market and had massively reduced their need to compete head-on with the competitor. Whew.

Diversifying the use case for their own product might have been smart even without the danger of a fortified competitor. But that scenario jump-started a life-saving plan.

Isaac Newton Had a Point

While every startup founder fantasizes about becoming a unicorn, few do. Including less-than-spectacular scenarios in you planning can feel like sandbagging. It isn’t. [Click to tweet this thought].

Pessimistic scenarios are hedges against group think and our flawed expectation that tomorrow will look like today. That, for example, property prices or cryptocurrency or oil will rise indefinitely. They won’t.

Even massively disrupting technologies eventually hit obstacles, and sometimes even progress in retrograde fashion. Five years ago, it seemed like taxis would disappear from major cities having been displaced by ridesharing. But a changing job market has made gig work less popular. Uber can’t find enough drivers.  So, they are including taxis as an option!

It’s important as you plan to true your assumptions against reality. Conditions, competition, and people change. Economic laws prevail. What goes up comes down.  Nothing lasts forever. “Past performance doesn’t guarantee future performance.” Clichés? Absolutely. But clichés emerge from real life.

If you ignore the very real natural and cyclical nature of life and markets, your scenario-planning won’t prepare you to win. Instead of interminable positivity, expect reversals and challenges. Plan to overcome them.