What Should We Do About Jesse? 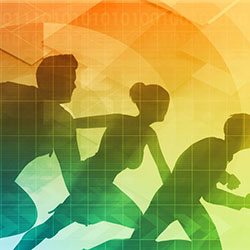 What Should We Do About Jesse?

Most of us have heard the well-worn trope that you should hire slowly and fire quickly. Like most categorical rules, this is over-simplistic. Firstly, the last half of the rule is almost never possible because the problem employee is rarely detected quickly.

But the first part – hire slowly – is usually an apt description. Recruitment is costly. If done well it takes multiple screenings, interviews, and deliberation. Sometimes a single director level hire can take months. Occasionally a dedicated human resource professional handles it, but in start-ups it’s more likely to be the eventual manager who conducts interviews. Once past that hurdle, a typical candidate will have multiple additional interviews with other team-members. This is laborious and the time that it takes must be carved out of existing projects that the department or team is responsible for completing.

No time to read? Watch this video in under 5 minutes.

Once a candidate is hired, another time-consuming process of onboarding occurs. Again, the manager must ensure that the new teammate learns both the working of the team and its processes, but also the greater organization, along with its culture, expectations, and systems. The new hire won’t initially pull her weight because she is learning, absorbing new information, adjusting to the systems and getting to know her teammates. The full process can take months.

It’s after all of that that employees emerge as potentially misfit. Almost every one of my client founders is dealing with at least one problematic case. Firing quickly suggests that “bad apples” sneak through the onerous hiring process; that is not what I usually see. Instead, the issues are often complicated, with multiple competing nuances.

New hires are on their best behavior. So, it takes time to discover the issues that become problematic. By then, the employee has responsibilities and a complicated set of connections to people and processes. Organizations are complex systems in which a single individual may play multiple different roles with varying relationships to multiple teams and projects. All these realities figure into a decision of how to approach the issue of a problematic team member.

So how do you proceed when someone has become a thorn? Some employees will thrive given the right feedback, training, and coaching – but others can do real damage to either the organization’s results or its other employees. Maybe the employee produces great results. But the results come at a cultural cost. In another case the individual’s own results are sub-optimal, but he has a great effect on the rest of the team – and those folks produce great results. And then, there are gradations of these that fall in the middle. So, which problem employees can you save, and which simply must go?

Here are some typical scenarios I hear from clients (names and title changed for privacy):

Each of these team-members has a very different issue, and the remedy should be equally unique. Based on the investment it takes to get a new employee up to speed –as well as the reality of the current job market, few leaders see dismissal as the first option.

The question is, of course, how do you know which you are dealing with?

To think about this, I created this simple diagram. 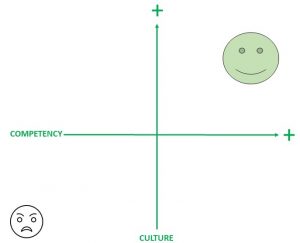 The two axes reflect the two main concerns for an employee within any organization. The vertical axis represents culture. Cultural fit should hew to the individual organization’s core values and correspondent behaviors, not to the degree of likeability or similarity of team members. Great cultural fits lead to better results, and more velocity in achieving initiatives. Someone who internalizes the culture can multiple its expression in the whole organization.

The horizontal access represents competency. In this case I mean specifically, the competency of the employee to do his actual job. Culture is a qualitative standard, while competency is usually measurable.

Most successful employees will fall in the northeast quadrant. And usually, the hiring process will have weeded out those in the southwest quadrant.

But people usually lie somewhere within the other two quadrants. They are brilliant performers with a 75% culture fit; or incredible team motivators who are good but not breathtaking at their functional role. Plus, individuals change over time and context. Someone who was exemplary prior to the pandemic, may lose focus while working from home.

The matrix provides a starting point to assess such issues. Plus. there are some general principles that apply:

Clearly, all of these are judgment calls. But, given the stakes involved, it’s almost always worth trying to retain a competent employee. Coaching, training, management, and metrics are important tools. But sometimes nothing works. I worked with a co-founder for over a year to try to help her become an effective executive. In the end, she couldn’t conquer her lack of emotional intelligence enough to stop creating a toxic workplace. In another case, a very much-loved finance team lead simply could not master the financial modeling required of him. Both instances were at the extremes of the matrix’ quadrants.

For the vast middle, use all the tools you have. Coaching, training and management really do help and sometimes work wonders!